Who was Andy Warhol? 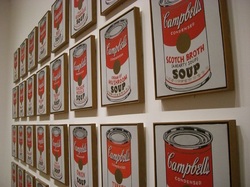 Andy Warhol was considered a "Pop Artist".  His works was a representation of the time.  One of his most famous work was "Campbell Soup".  Mr. Warhol was also known for his graphics of Marilyn Monroe, Michael Jackson and others.